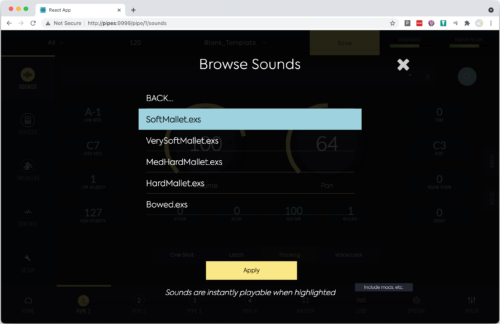 Here is some information on the successes I have had with sync’ing my Pipes_User_Library. If you have a sample instrument that falls within the spec of what is compatible with Pipes but it still does not load/play, then the Synesthesia folks can help – email just the container file (.exs, .nki, etc. not the samples) to techsupport@synesthesiacorp.com.

Here is the process that works for me:

Creating an EXS instrument (aka “mapping”)

Creating an instrument is easy as long as the WAV files are named in an organized way. The Logic Sampler will recognize the root pitch and velocity from the file name. This is done using the “automap” feature. As an example, I’ll create a velocity sensitive “SineSaw.exs” instrument using the same 14 WAV files that were used above. Since Pipes’ Syncer only copies new files, this instrument will copy quickly.

You may want to use part of a commercial library. Or, perhaps, the library didn’t work correctly with Pipes and needed to be fixed. This process can be useful if you have a bunch of organized WAV files and just need to create a mapping.

Again, if you have a sample instrument that falls within the spec of what is compatible with Pipes but it still does not load/play, then the Synesthesia folks can help – email the container file (.exs, .nki, etc. not the samples) to techsupport@synesthesiacorp.com.

For some reason, Puremagnetik’s EXS instruments wouldn’t work with Pipes as downloaded. Also, I don’t want to bog down Pipes with too many files. Puremagnetik’s library includes 661 WAV files. I was fine with 170 WAV files for Pipes.

I’m not sure (yet) whether the Pipes “Syncer” has a problem with Puremagnetik’s EXS mapping or with the WAV files themselves. So, I batch converted all of the WAVs to 48k using SoX (removing any weird meta data) and created a new EXS patch in Logic using only the 127-velocity WAV files.

Fortunately, this is pretty easy since Puremagnetik’s files are named like “MedHardMallet-DI-1-060-127.wav” (for C4/127) allowing Logic’s “Automap Using Root Note from Audio File Names” to provide a keymap.

In short, you create and open a stereo “Sampler” instrument in Logic, click into “Mapping”, Zone->Load Audio Files (select a group of WAV files; say all files in a folder), Zone->Automap, then Save As…

Here are the steps for making adjusting Puremagnetik’s “MalletPak Two” to work with Pipes: