TrevoCon-X-Touch (v.97) is a Max for Live plugin for realizing the full capabilities of the Behringer X-Touch mini USB MIDI controller. The controller has 2 layers of 8 knobs, 16 buttons and a fader (so 50 controls). This is a great device for controlling modules in VCV Rack. There are 2 main shortcomings with the X-Touch mini for this: Even the simplest modular rack has more than 50 adjustments and the VCV “MIDI-MAP” module only works with CC and not MIDI notes. Since the X-Touch’s buttons are all MIDI notes, we’re brought down to only 16 controls. Then, Behringer corporate completely dropped the ball and never released an editor for the Mac.  So, we’re stuck with MIDI notes on the buttons and no way to change the MIDI channel.

TrevoCon-X-Touch in conjunction with Ableton Live 10 Suite, overcomes these limitations and also gives us the capability to create control groups (so that one X-Touch mini can control multiple sets of instruments) and even save automation.

I want to thank the folks on the VCV Rack Official User Group for their input on automating, remapping and saving control data. I started the development then posted the first example on the FB group. Omer, Artem, Frequence Morte, Gabriel and Antonio all gave valuable feedback. They pointed out these options:

This input gave me important perspective on what can be done entirely within VCV Rack. And, it influenced me to focus on adding features to the X-Touch and Ableton Live automation (that could not otherwise be done with in the Rack).

TrevoCon-X-Touch not only provides capability for use of the X-Touch mini with VCV Rack but it also gives us the capability of using Ableton Live as “console automation” for the Rack. Just arm the tracks and record.  The main track will record the raw input from the X-Touch. The CC data will show in the Ableton Live “Envelopes” area. Notice how the buttons (including the group changes) are recorded as MIDI notes.

The Auto tracks will record the processed data for the particular group only. 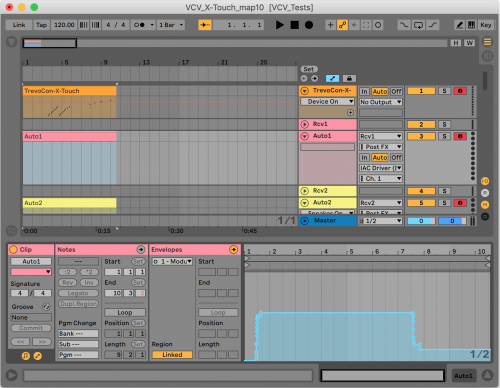 Don’t look at the screen!

Finally, the bottom right buttons of the X-Touch are mapped to STOP and RECORD in Ableton Live’s transport. Hit RECORD (the circle) then never look at the Ableton screen again.

So, if you’re using Windows, you can just buy a bunch of X-Touch mini’s and using the Editor. I know that’s not ideal. While the TrevoCon-X-Touch patch should work fine on Windows, the inter-application MIDI mapping is slightly different. If there’s interest, I’ll post something about this soon.

The “What is Modular” discussion

Some folks may argue that adding automation capability to a modular rack goes against the culture. I will argue that knob automation brings us in to the ’90’s – no different than the Windows 95 automation systems setup for analogue console control of the time. We are still maintaining the integrity of the instrument, yet providing the added capability of “recording the mix”. This is not a DAW, but simply knob tracking.

This feature does give us new capabilities that would otherwise not be possible with most modular rigs. We can “overdub” and “edit” performances. I would argue that this is no different than multi-track recording and mixing separately. However this method is better and it preserves the integrity of the instrument (with no audio level editing or crossfading).

Finally, this type of automation gives us the important capability of establishing a solid archive of an electroacoustic composition (or “song”). That is, a piece can be stored and shared as a VCV Rack along with its automation data. Such as collection can be used to re-perform a song. This could mean changing the automation data or changing out modules while using the same data.

Note that a “MetaSong” may require more than just the rack and automation data. Modules such as samplers, for example, may require that the samples be including. And, since “A song is a musical composition intended to be vocally performed by the human voice“, it’s possible that a song could be the combination of a VCV Rack patch, the automation data, support files (such as samples) and a recorded track (such as live Vocals, Guitar or Trumpet). The MetaSong is all of this.

Hipster Modular “Placebo Controlled” uses the following VCV Rack along with TrevoCon-X-Touch to perform and record automation This piece is the first in the “MetaSong” series. It was created using 3 probability-driven instruments and a sample from our friend Dr. Fauci (collected live). In this example, 3 MIDI-MAP modules are used to control the ENTROPIA modules, the Simpler, the mixer and the feedback on the delay. 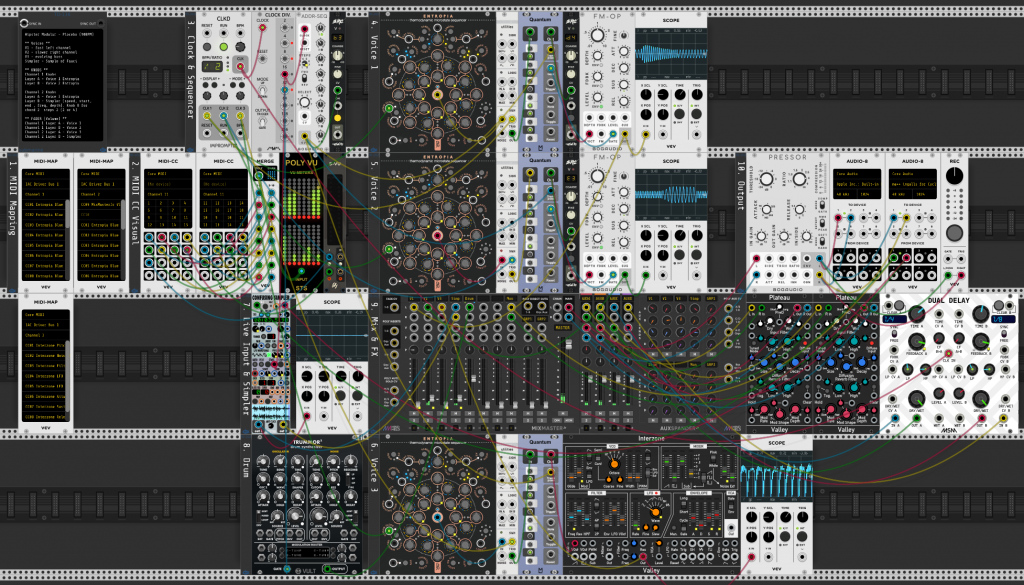 The piece leverage ideas from the “Midi Mapping in VCV Rack 1.0” youtube video. by Omri Cohen. The 5:42 recording can be heard on Soundcloud – Hipster Modular – Placebo Controlled.